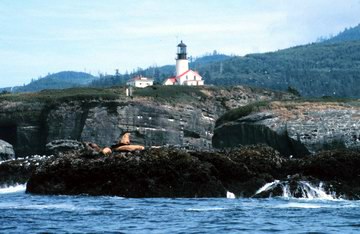 Tatoosh Island is a rocky island, including a lighthouse, weather station, and naval station in the Pacific Ocean a mile north of Cape Flattery in northwest Clallam County. In 1857, the lighthouse was built to guide ships entering the Strait of Juan de Fuca. Capt. John Meares named the island Tatootche in 1788 when he was entertained nearby by Chief Tatootche. The Chinook name means Thunderbird, or nourishing beast, as the island was the legendary home of that huge creature. In Makah language the name is Tu-tutsh. In 1790, Alferez Manuel Quimper, who came a Spanish expedition named it Isla de Tutusi. 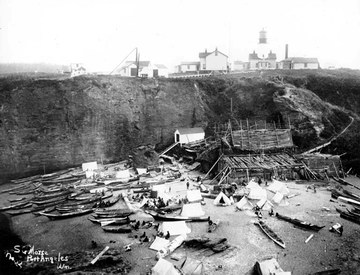 The island was important to the culture of the Makahs even after the building of the lighthouse and was a traditional potlatch site. In this 1895 photograph canoes are pulled up onto beach filled with tents and a large cedar-planked building abutting a cliff-face. On top on cliff are a number of buildings, including the Cape Flattery Lighthouse. People can be seen moving about and sitting on the beach. 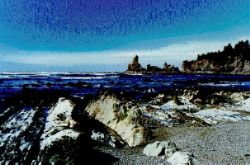 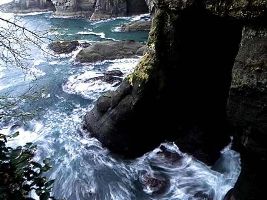 Tatoosh Island has seen many maritime disasters and marks the entrance to the Straits of Juan de Fuca. The Chinook name means Thunderbird, as the island is the legendary home that guardian spirit which has the power to invoke thunder and lightning and create the weather. TATOOSH is the mythological Thunderbird, the creator and controller of all elements and spirits. When he flew, the flapping of his wings caused the thunder, and the flashing of his eyes caused the lightning.

An excellent picture of the Cape Flattery Lighthouse
by theLighthouse People. 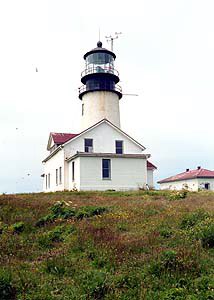 The Weather Station at Tatoosh Island 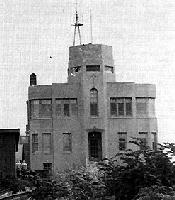 Here is an excerpt from a 1943 newspaper article:


So perpendicular are the seventy-five foot cliffs, no ship can land. The mail boat making its weekly trip pulls up under the lee of the north wall. If the weather is mild (which it usually isn't) diesel-powered winches lower a basket on a cable. With many misgivings the visitor hurriedly scampers into the cage and up he goes like the man on the flying trapeze, dangling between sea and sky. A half dozen coast guardsmen steady the basket as it plunks on the platform, and there you are. "Come on up and see me sometime." 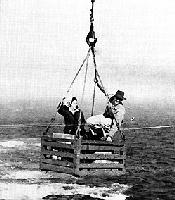